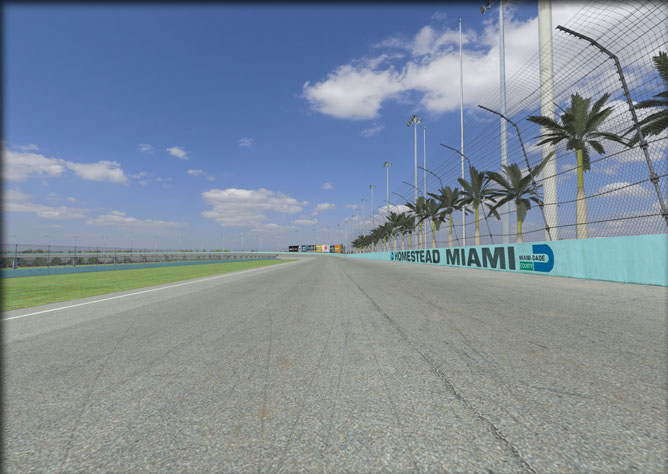 The old saying, “it’s an ill wind that blows no good,” could be appropriately applied to Homestead-Miami Speedway. In the wake of Hurricane Andrew in August, 1992, South Florida racing promoter Ralph Sanchez began organizing construction of the region’s first major-league motorsports facility as part of the reconstruction of the devastated Homestead community. Ground-breaking took place the following August and in November, 2005, the first event, a NASCAR Nationwide Series race, was won by Dale Jarrett.

Host to the NASCAR Sprint Cup Series season-finale, as well as NASCAR Nationwide Series and NASCAR Craftsman Truck Series; The 1.5-mile variable-banked Homestead-Miami oval is also the site of the season-opening Indy Racing League series event. Rounds of the Grand-Am Rolex Sports Car Series and Grand-Am KONI Challenge Series take place on the IRL weekend, with a quick conversion to one of the two road-circuit configurations. SCCA amateur races and CSS motorcycle races also take place on the road circuit.

With more than a thousand palm trees and a Caribbean color scheme, the facility projects a South Beach flavor that distinguishes Homestead-Miami from other major race tracks in America. It took a while longer to get the right combination for the racing surface. In its first iteration, the track had four separate low-banked corners, reminiscent of a mini Indianapolis Motor Speedway. That configuration failed to promote good racing, and unfortunately also provided bad crash angles. Widening the aprons failed to correct either of these problems.

A major reconfiguration of the track during the summer of 1997 brought a more conventional layout – sweeping 180-degree corners at either end of the oval. Close, but still no cigar. But the most recent work on the track, during which the track assumed variable banking – up to 20 degrees in the corners, flattening to 3 degrees on the straightaways – has done the trick. Everyone agrees, at Homestead-Miami, the beauty is now more than skin deep.

REPLAY: Ryan Luza Goes Back to Victory lane at Homestead

Ryan Luza won Tuesday night’s eNASCAR Coca-Cola iRacing Series event at Homestead-Miami Speedway. You can never count Luza out at Homestead as he has...

Homestead-Miami Speedway currently has three configurations, with an oval and two road course versions. The Oval (pictured left) is a 1.5 mile (2.414 km)...