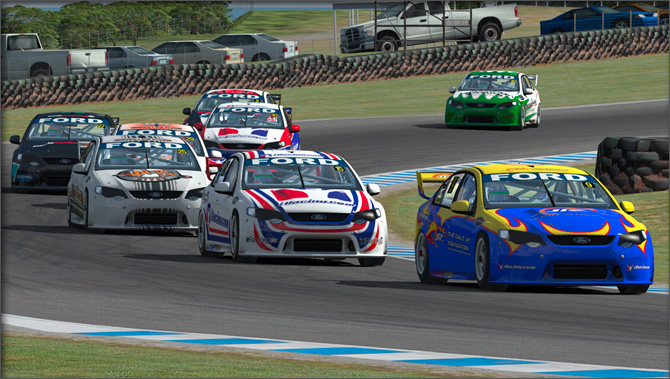 The Ford Falcon is one of the twin staples of the hugely popular Australian V8 Supercar Series. Together with arch rival Holden Commodores, the Ford Falcons contest what many believe to be the world’s most competitive and compelling sedan championship. The series is contested on the road courses and street circuits of Australia and New Zealand and — with events in Bahrain and China — elsewhere around the world. The annual Bathurst 1000, staged on an awesome Mt. Panorama circuit that is part country road, part permanent road course, rivals Daytona, Indianapolis, Le Mans and Monaco as one of the great spectacles in motorsports.

Like the Commodore, the Falcon is built to strict regulations which seek to balance technical competition and speed with reasonable costs. Thus the Falcon is based on a current specification FG Falcon production bodyshell complete with spoilers, wings, side-skirts and a front splitter, along with a sturdy roll cage. The car is a front-engine, rear-wheel-drive design and features a five-liter “Boss 302” SVO capable of producing 620 – 650 brake horsepower. The engine is a push rod, two valve design equipped with electronic fuel injection and electronically limited to 7,500 RPM. As required by series rules, the Falcon utilizes a double-wishbone front suspension and a live rear axle with four longitudinal links and a Watt’s linkage for lateral positioning. The Falcon sports front and rear (steel) disc brakes and an Australian-made six speed Hollinger gearbox.

In this article:Falcon, Ford, Supercar, V8

Welcome to the world of Rallycross! Rallycross is a form of racing that combines asphalt and dirt track sections into a short circuit, that...