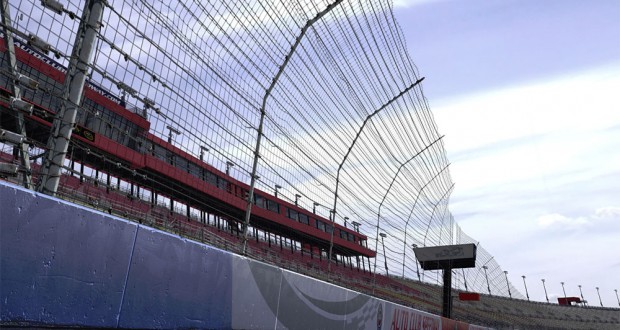 With the addition of Auto Club Speedway, iRacers can now own a laser-scanned version of each and every track on the NASCAR Sprint Cup calendar. We’ve got you covered from Daytona to Dover, Sonoma to Homestead and now, finally, Fontana.   What’s more, Auto Club Speedway comes with four configurations including the 2 mile superspeedway along with three different road course layouts.

Auto Club Speedway is the premier motorsports facility in Southern California. Bult on the site of former Kaiser Steel mill in Fontana in 1996-97 at a cost of $100m, the track has 84,000 permanent seats and is home to a NASCAR Sprint Cup and Nationwide Series race each spring. As well, Auto Club Speedway has played host to virtually every top level professional motorsports series in North America and is home of both world’s closed course speed record (established when Gil de Ferran qualifyied for the pole at the 2000 California 500 with a one lap average speed of 241.428 mph) and the fastest circuit race (the 2003 California 400 won by Sam Hornish Jr. at an average speed of 207.151 mph).

In addition to a high-banked oval, Auto Club Speedway features several road course configurations which have been used for sports car and motorcycle races, as well as an infield track used for testing purposes. Given its proximity to Hollywood, the track has also appeared in scores of movies, television shows and commericals.