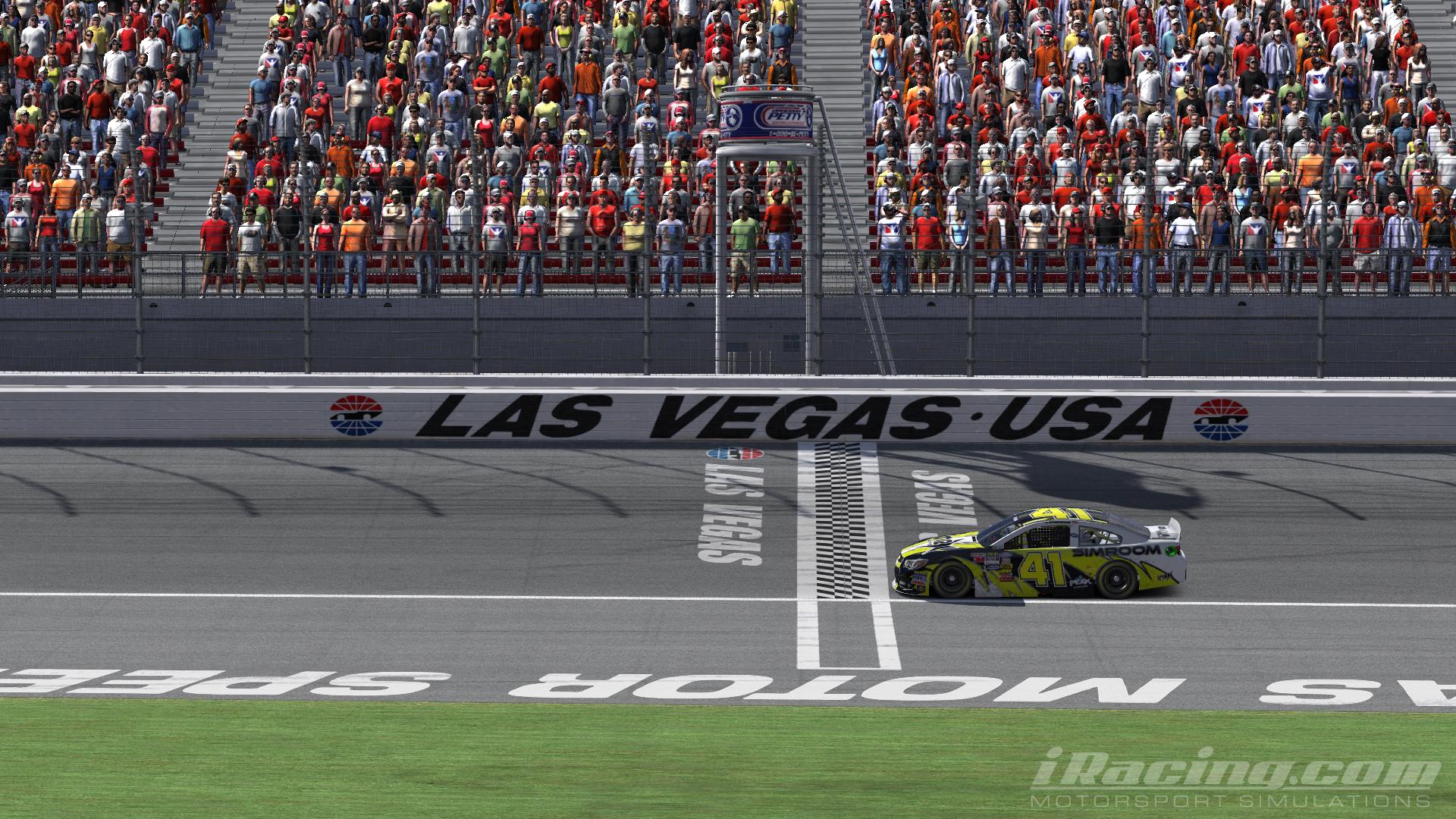 Jake Stergios has something figured out at Las Vegas Motor Speedway, something that is leaving the rest of the field collectively scratching their heads. For the second time in three years Stergios played the fuel mileage game just right at Vegas and scored his second career victory in the NASCAR PEAK Antifreeze Series Powered by iRacing.

“(I) still can’t believe it,” said Stergios. “Even if it was on fuel strategy again it is amazing to pick up another win in this series.”

Stergios’ victory is proof positive that the first driver across the finish line is not necessarily the fastest; rather it’s the one who puts together the most complete race. Although he only led 14 of 167 laps, Stergios made the winning move with 116 laps remaining when he started conserving fuel in hopes of making it to the end on one more stop if the race went green.

Peter Bennett also stretched his fuel to come home second, but he was more than 11 seconds behind Stergios. “I was really happy with second place but I feel like I could have competed with Jake for the win if I had restarted closer to him,” said Bennett. Bennett’s inability to get close enough to Stergios goes to show how important track position can be, even in the first half of the online race.

Thomas Lewandowski and Chris Overland went the distance on one stop as well, finishing third and fourth respectively. While Overland was 17 seconds behind at the checkers, he was actually much closer to victory than it appears. If Overland had not been caught speeding on pit road during his green flag stop, he likely would have been right with Stergios in a battle for the win.

“Even if it was on fuel strategy again it is amazing to pick up another win in this series.” — Jake Stergios

Defending NPAS champion Tyler Hudson came home fifth and was the highest finishing driver who chose a two-stop strategy during the last run. Hudson and Daytona winner Kenny Humpe had the two fastest cars for most of the race but could not make up the time they lost by pitting one more time than Stergios.

While most of the sim-racers were struggling with fuel mileage, others were having a different issue: the wall. The 2014 car has proven to be somewhat fragile and what looks like minor contact can damage the car badly enough to rob precious tenths from lap times, as Kevin King and Danny Hansen learned the hard way. Both drivers were having strong runs when they made slight contact with the outside wall. Both cars were never the same after the hits, as Hansen wound-up twenty-eighth, five spots ahead of King.

Hudson (01) and Humpe (58) had two of the fastest cars but the wrong fuel strategy.

It was also a tough night for polesitter Alex Warren, who looked strong in the early going. Warren was undone by connection issues and finished three laps down in fortieth after leading the first eight circuits.

With a strong seventh place result at Vegas, Humpe keeps the point lead and holds a four point advantage over Lewandowski, the only driver to finish in the top five at both Vegas and Daytona. Brandon Kettelle also backed up his strong run at Daytona with a top ten finish at Vegas and sits third in the standings, seven points back of the lead. Stergios’ win vaulted him all the way to fourth, where he is tied with Chad Laughton.

Next up is the series’ inaugural visit to Auto Club Speedway for Week Three of the season. Look for Hudson and Humpe to be near the front, as ACS uses the same tire as LVMS, but another fuel mileage race would not surprise anyone. Qualifying and pit strategy figure to be important as the race will likely run much like a Michigan race; as in few cautions and a race track that makes passing difficult. Can Hudson close the deal for his first win of 2014, or can Stergios hit the jackpot in back-to-back races? With this being the series’ first visit to ACS, no one has any experience to draw from which could level the playing field, perhaps resulting in a dark horse winner.

Be sure to catch all the action from ACS as the NASCAR PEAK Antifreeze Series returns to action in two weeks’ time on iRacingLive.com!