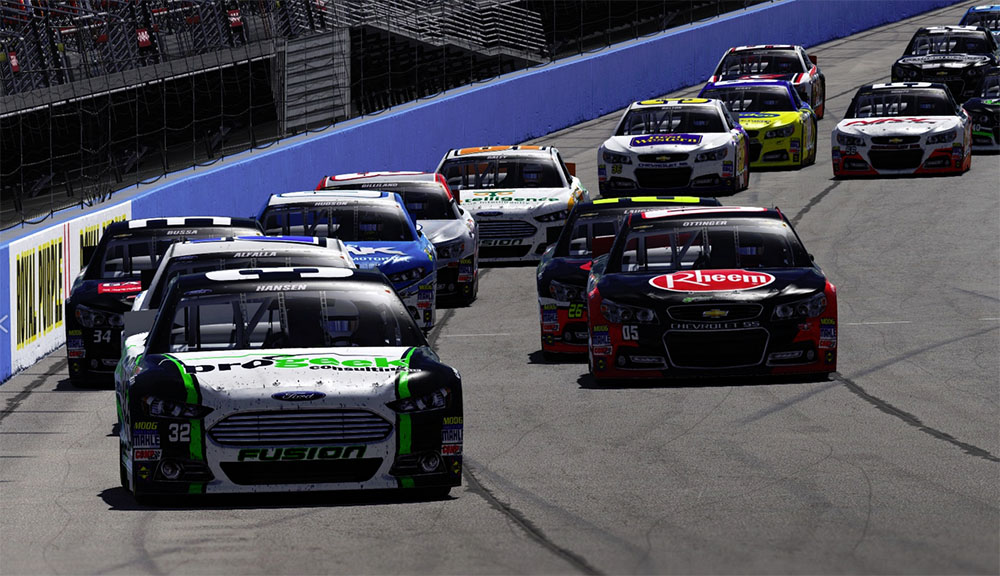 Nick Ottinger held-off Danny Hansen during a flurry of late-race restarts at Auto Club Speedway Tuesday night, capturing his first victory of the 2014 season in the NASCAR Peak Antifreeze Series Powered by iRacing. The two battled for the lead for much of the race after starting fourth and second respectively, with Hansen appearing to have the better car before an incident with Josh Berry.  Despite the setback Hansen held on for second, the best finish of his career.

Even though he led a race-high 72 laps, Ottinger may have left some speed on the table. “Awesome to get our first win of 2014!” he said. “We saved fuel for a portion of each run and could still run competitive.”

Two-time NASCAR PEAK Antifreeze Series champion Ray Alfalla finished third for a much-needed top five after starting from the pole, with defending champion Tyler Hudson fourth and Brad Davies coming from twenty-ninth on the grid to round-out the top five.

After leading the first few laps from the pole, Alfalla ceded the top spot to Ottinger and Hansen, who swapped the lead and battled nose-to-tail for the first run of the race with neither driver able to pull away.

Ottinger used a great entry onto pit road and a lightning fast pit stop to build a gap over Hansen, but that was quickly erased when the first yellow flag flew on Lap 52. During the ensuing pit stops, Hansen passed Ottinger in the pits and quickly moved past the three cars in front of him to retake the lead on Lap 58. The lead was short-lived as Alfalla drew alongside Hansen down the backstretch on Lap 60 and regained first place.

Losing the lead proved costly for Hansen as he was pinned on the outside for several laps and fell all the way back to ninth. Even with a strong car, catching the leaders would be a challenge. A caution on Lap 90 helped Hansen’s cause as it enabled him to catch-up to Ottinger and Hudson, who had both started to distance themselves from the field.

On the next restart, things got worse for Hansen when Berry got a bit high off of Turn Four, hit the wall and spun into Hansen. While the damage was slight and Hansen kept his car straight, the slight loss of speed was enough to put Hansen on the defensive during the last 30 laps.

After the race went green for most of the first two-thirds of the laps, cautions bred cautions in the final laps as drivers fought for the bottom on restarts. In all, eight cautions slowed the pace for 30 of 125 laps, seven of which came on Lap 90 or later.

The race was slowed by eight cautions for 30 laps.

The frequent yellows kept Ottinger safe at the front as Hansen was unable to make a challenge with his wounded car. Likewise, the yellows helped Hansen retain second as the race never went green for more than three laps in a row after Lap 90.  Whenever the other front-runners appeared ready to pounce, the caution flew and so Hansen was able to keep Alfalla, Hudson and Davies at bay over the final laps.

With a sixth place finish that included leading 14 laps, Kenny Humpe extended his series points lead. He now heads the championship by 11 points over Brandon Kettle, who came home ninth in the series’ inaugural visit to Auto Club Speedway.  Hansen’s runner-up finish vaulted him into a tie for third in the standings with last night’s tenth place finisher, Byron Daley, while Peter Bennett is three points behind them in fifth after a solid seventh place run at ACS. Notably missing from the top five is Thomas Lewandowski, who fell from second to sixth in the standings after crashing out of the online race and finishing thirty-fourth.

Week Four of the season will take the NASCAR PEAK Antifreeze Series to the fast Texas Motor Speedway, where Ottinger will look to defend his victory from a year ago. It will not be easy by any means with many sim-racers running just as strongly as Ottinger. Can Ottinger make it two in a row at Texas, will Alfalla and Hudson get their seasons back on track, or is it Hansen’s turn to visit Victory Lane for the first time? Be sure to catch all the action on iRacing Live when 43 of iRacing’s finest tackle TMS!