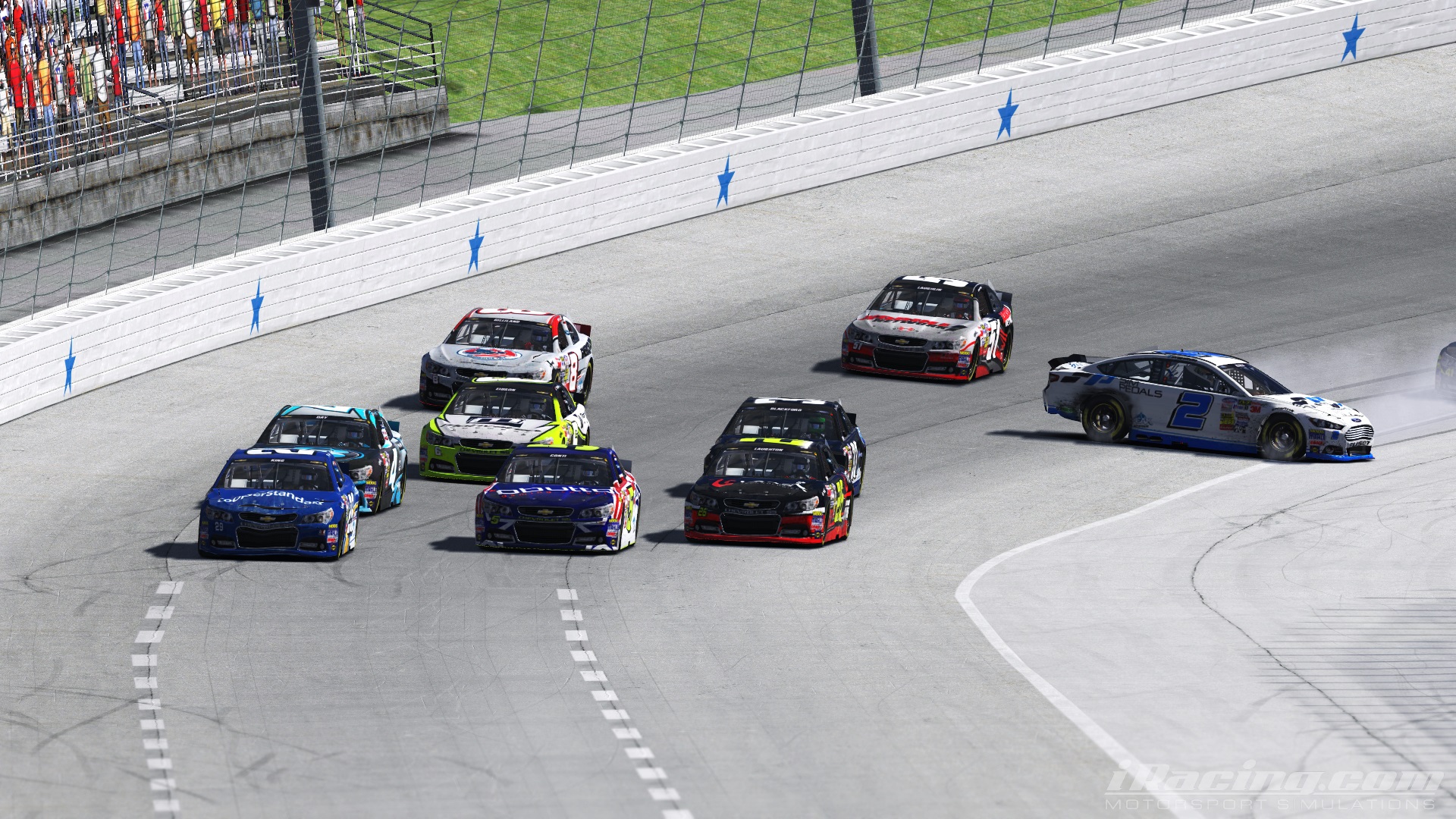 In a race at Texas Motor Speedway that saw crashes and tempers take half the field out of contention, Kevin King kept his nose clean just long enough to score his first win of the 2014 NASCAR PEAK Antifreeze Series Powered by iRacing. King, who had a fifteenth place car by his own admission, made a late gamble on pit road, then took advantage of contact between Ray Alfalla and Chad Laughton to squeeze by into the lead just as the caution flew to end the online race. Michael Conti finished second while Laughton settled for third after his run-in with Alfalla. Trey Eidson led late before fading to fourth and Adam Gilliland rounded-out the top five.

With six laps to go, King was sitting in third just a couple car lengths off Alfalla and Laughton, who were nose-to-tail for the lead. With laps winding down, Laughton decided to go for it and made contact with Alfalla in Turn Three. The contact sent Alfalla’s car up the track, enabling Laughton to take the lead and King to close the gap.

Alfalla regrouped, got a run off Turn Four and closed right to Laughton’s bumper entering Turn One.  As the two dove off into the corner Alfalla tapped Laughton in the left rear, sending Laughton into a slow spin.   Trying to avoid further contact, Alfalla checked-up . . . only to be hit from behind by the closely-following King.  The contact cleared the way for King to take the lead with Conti right behind even as Gilliland hit Alfalla, spinning the two time champion around.  The resulting caution likely saved King as the front end of his car was seriously damaged from the contact with Alfalla.

The cautions came early and often at Texas, with this multi-car crash on Lap 146 eliminating a host of competitors.

After running mid-pack much of the race, King used a two tire pit stop under caution with 26 laps remaining to vault from nineteenth to ninth for the ensuing restart. At first, the two tire call looked like a bad one as King was quickly kicked to the outside line on the restart and began dropping back. However, on the very next lap Byron Daleyand Brandon Hauck got together on the backstretch, sparking a massive crash that took out more than a dozen cars. King’s position on the high side allowed him to keep his foot in the throttle and drive past the mayhem before the wrecked cars came back up the track.

Ten cautions slowed the field for 39 laps, quite a few for a 1.5 mile track. The carnage started early as the first yellow flew on Lap Four when Kwame Adjei got turned around coming off Turn Two. A pair of yellows also involved defending series champion Tyler Hudson and Nick Ottinger, winner at Auto Club Speedway a fortnight ago.  The first occurred on Lap 72 when Hudson attempted to pass Ottingerdown the backstretch. Ottinger decided to throw a block, Hudson took exception and Ottinger wound-up in the outside wall with damage to the rear end of his race car.

The two were not finished with one another.  They renewed acquaintances on Lap 139 shortly after taking the wave-around when they were caught a lap down in the pits following a caution for Joshua Laughton’s crash. Hudson, who was back on the lead lap, took exception to Ottinger, who was lapped, racing him hard.   Once again contact sent Ottinger for a spin, triggering the caution which saw King make his two tire pit call.

Ottinger (5) and Hudson (01) exchange pleasantries ahead of Daley.

With all the crashes, the series point standings saw a bit of a shakeup. Daytona winner Kenny Humpe still leads the standings over Brandon Kettelle, but several other drivers have closed the gap after both Humpe and Kettelle were involved in crashes and finished outside the top 25 at Texas. The race was especially heartbreaking for Humpe who had one of the strongest cars in the field and led 55 laps before crashing late in the race. Humpe now leads Kettelle by only ten points with King sitting after his win third, 15 back of the lead. Jake Stergios moved up to fourth after an eighth place run, one point back of King while Chad Laughton bookends the top five, two points behind Stergios. The biggest loser in the points this week was Danny Hansen, who fell to seventh after an early crash.

With the chaos of Texas in their rear view mirrors, the NASCAR PEAK Antifreeze Series heads to Richmond International Raceway, a track with a reputation for its fair share of cautions and mad drivers by the night’s end. With the turmoil at Texas likely still fresh in many drivers’ minds, Richmond may see more tempers boiling over. Combine that with a tight points battle, and a crash or poor finish for Humpe or Kettelle could open the door for a new face to top the standings. Who will survive 200 grueling laps of sim-racing at Richmond?

Find out in two weeks when the NASCAR PEAK Antifreee Series Powered by iRacing.com returns to action on iRacing Live and MRN.com on Tuesday, April 22 at 9pm EDT (01:00 GMT).