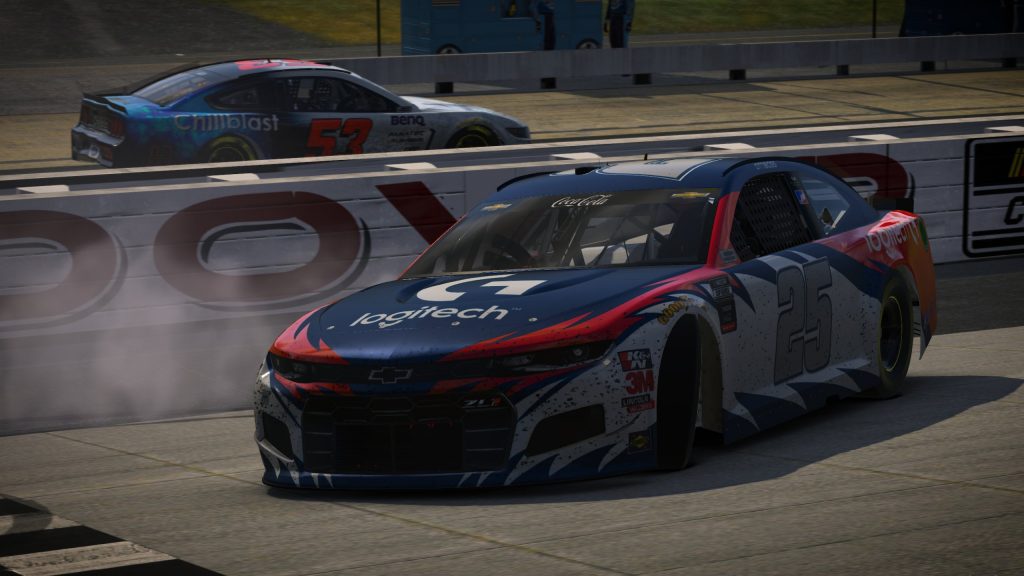 Ottinger, the veteran driver, handed over his second position on the all-time wins list following Luza’s win in the last race at Richmond, but Ottinger’s victory – his first since Talladega last year – moved him back into a tie for No. 2 behind series G.O.A.T. Ray Alfalla. It also denied Luza a fourth straight win, which no driver has ever accomplished in series’ history.

Alfalla started the race from the pole, but quickly lost ground in the opening run. Long green-flag runs, a theme of the night, proved quite a contrast from the past two events; the race was slowed just twice for incidents.

It was looking like yet another Ryan Luza sort of night until Lap 78 when Miles the Monster decided to have a virtual Ford Mustang snack – Luza nailed the outside wall from the lead, giving way to Nick Ottinger.

Ottinger’s William Byron eSports entry looked untouchable with Luza out of contention – the only real challenger was Wood Brothers Racing’s Garrett Lowe, who tagged the wall and lost speed while attempting a pass for the lead.

It looked as though the race might slip out of Car No. 25’s hands in the closing laps when John Gorlinsky – Ottinger’s teammate, of all the cars – went for a ride, bringing out the race’s second and final caution, erasing the leader’s advantage.

Nevertheless, Ottinger held on, driving away in the final green-flag run to score the victory, his second at the Monster Mile and first since 2013 – the same year he first set the series’ three-consecutive-wins record that was much-discussed over the past two weeks.

Ottinger’s victory was the first for William Byron eSports, a new team in this year’s eNASCAR Coca-Cola iRacing Series.

The eNASCAR Coca-Cola iRacing Series heads next to Charlotte Motor Speedway on May 12.