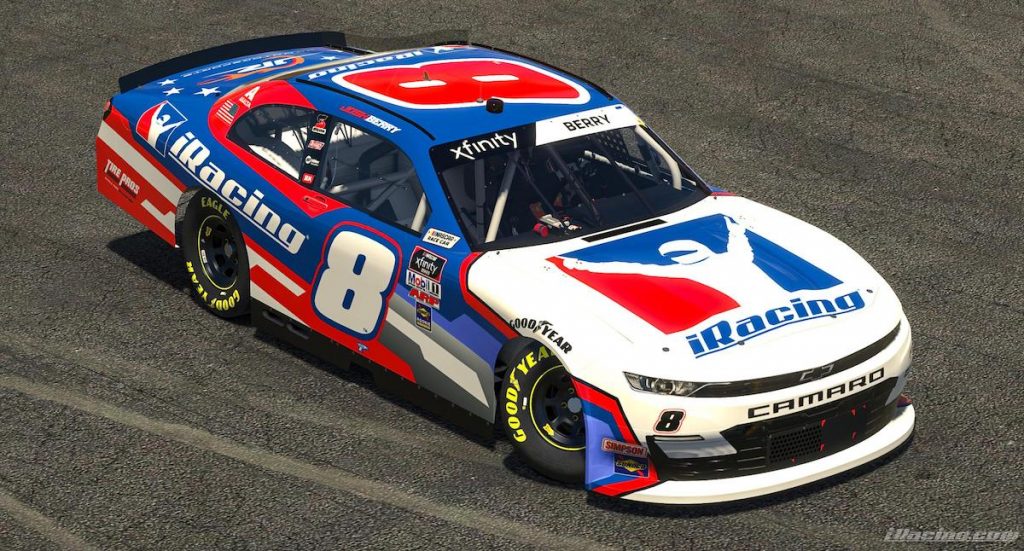 It’s a match made in both real racing and sim racing heaven: iRacing returns to the primary sponsorship space of a NASCAR Xfinity Series car this weekend at Nashville Superspeedway with Josh Berry and JR Motorsports’ #8 Chevrolet Camaro for the Tennessee Lottery 250. To celebrate the track’s release on iRacing just weeks earlier, Berry, who grew up in nearby Hendersonville and met JRM founder Dale Earnhardt Jr. through sim racing, will wrap up his popular part-time 2021 campaign with iRacing on the hood.

Nashville Superspeedway was revitalized for NASCAR’s return to the track in 2021, hosting all three national series for the first time as the NASCAR Cup Series makes its debut there on Sunday. As part of the real-world relaunch, iRacing has painstakingly recreated the track as a part of 2021 Season 3. The 1.33-mile D-shaped oval, a faithful representation of its real-world counterpart and highly popular with iRacers already, is available for purchase now.

iRacing has been a longtime supporter of Berry’s real-world racing efforts with JRM, including his 2020 NASCAR Advance Auto Parts Weekly Series national championship. The paint scheme on the #8 car this weekend is an homage to the roots of sim racing; it reflects fictional driver Fred Jones’ Papyrus car from NASCAR Racing 2003 Season, one of iRacing’s forerunners in the world of motorsport simulations. In 12 starts thus far in 2021, Berry has three top-five and six top-10 finishes, including a popular victory at Martinsville Speedway.

“It’s going to be nice racing close to home,” said Berry. “I plan on heading over there early to see some family and friends before the race this weekend. I got my start in Sim Racing and that’s how Dale and I became such good of friends, so it’s really cool to have iRacing on our car. This scheme looks so good. Hopefully we can put this iRacing Chevrolet in Victory Lane. Nothing would be better than to cap off my first Xfinity season with another victory with this team.”

In this article:iRacing, JR Motorsports, Nashville