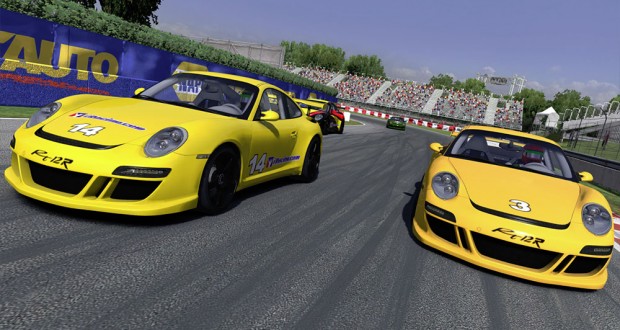 iRacing’s elves have been working round the clock on not one, not two, not three but four different versions of the sensational RUF. We have a preview of three of them — the 500 bhp Track, the 450 bhp C spec or the 730 bhp RWD (rear wheel drive) – for iRacers to play with over the holidays, while the RUF AWD (all wheel drive) will be released in early 2014.  That’s four – count ‘em four — RUFs for the price of one.

The RUF Track is a powerful and durable, yet reassuringly nimble sports car. With its normally-aspirated, four liter flat six cylinder engine pumping some 500 bhp through a six speed, sequential gearbox and dual ABS braking systems, the 2645 lb (1200 kg) RUF Track is more than capable of giving cars like the McLaren MP4-12C GT3 a run for their money.

The RUF C-Spec is a full-on race car, but one tailored to the single make, spec-class sports car series which have found increasing favor around the world in recent years. There’s plenty of power on tap from the normally-aspirated flat six, while the beefy six speed, sequential gearbox and twin, independent brake systems underline the C-Spec’s staying power in the “level playing field” environment of spec series.

Simply stated, the RUF RWD is among the highest performing of the world’s high performance automobiles. At the heart of the RWD’s performance is a 3.8 liter, twin-turbo flat six engine producing 730 horsepower and nearly 700 lb/ft of torque. That’s no misprint: 730 hbp and 700 lb/ft of torque in a sleek sports car that tips the scales at less than 3300 lbs/1500 kg. Small wonder that, when coupled with a six speed transmission, the RUF RWD hits a top speed of 230mph.

The Bullring at Las Vegas Motor Speedway will be coming to iRacing! This great 3/8th mile paved oval is located between LVMS and Nellis...

As you all know, we’ve been working incredibly hard to bring authentic dirt racing to iRacing. This project has involved every developer in one...