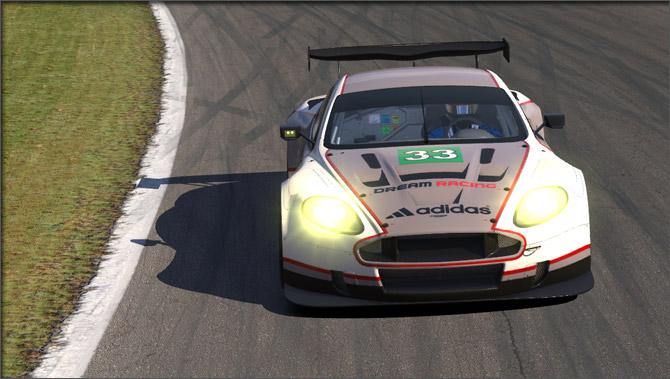 The Aston Martin DBR9 pays homage to former Austin Martin owner David Brown whose Aston Martin DBR1s won the 24 Hours of Le Mans and the World Sports Car Championship in 1959. The DBR9 lived-up to its heritage by winning its competition debut in the 2005 12 Hours of Sebring before taking successive GT1 class wins at Le Mans in ’07 and ’08 and achieving considerable success in the American and European Le Mans Series competition as well as the FIA GT Championship in the hands of the works Aston Martin team and several privateer teams.

Based on the road-going Aston Martin DB9, the DBR9 retains the chassis, V12 engine block and cylinder heads of the DB9. The rest of the car is re-engineered for high performance competition with steel roll cage, XTRAC sequential transmission, carbon composite body panels, flat bottom between the front and rear diffusers and a carbon fiber rear wing.

iRacing is proud to introduce the Aston Martin DBR9 GT1 to the GT1 lineup.