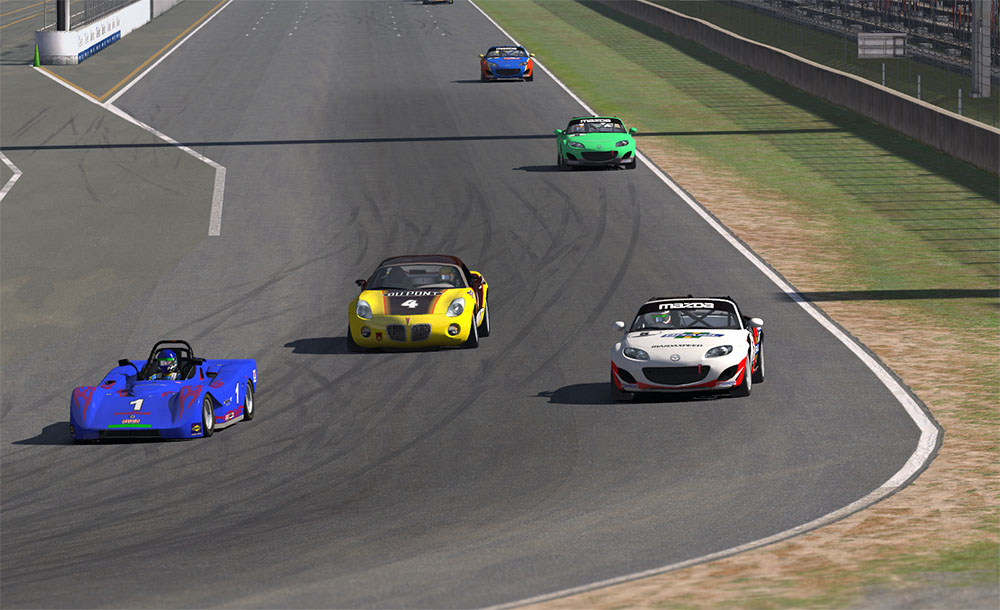 Here are the release notes for tomorrow’s new season’s update.

Edit: The New Hampshire Motor Speedway update has been delayed. The new Legends configuration will not be available immediately with the new season’s build, but will arrive in an update within a few days.

My Account has been updated to be easier to use, and to allow you to manage your information and personal data faster. You may also now manage more email notification preferences.

The Driving School and How-to video sections have been overhauled and redone. They’re faster, more reliable, and easier to use now.

– When creating a session, there will be a new “NOTIFICATION” section at the bottom of the page as the last panel. Opening the panel will reveal a form with four notification options:
· Don’t Send – This is the default action. No notifications will be sent when this option is checked.
· Send Now – This will send out a notification to the distribution list (see below) at the time the session is created.
· Send at Time Before – This will allow the League Admin to select an amount of time before the session starts to send the notification. The times are from 15 minutes to 2 hours in 15 minute increments.
· Send at Set Time – This option will allow the League Admin to set a specific date and time to send the notification.

– When a notification option other than Don’t Send is selected the following distribution options are revealed along with a place to type a message and a time selection control:
· Send to All League Members – Choosing this will send the notification to all who are members at the time of the session being created. Deleting a member from the league will have no effect.
· Send to League Members In Grid – This option will send the notification to all members in the grid setup for the session. If any member(s) is/are added or deleted from the league, the notification will be sent to all current members at the time of notification.
· Send to Specific League Members – Choosing this will display a list of league members to choose from. Simply click on a member to select/deselect.

All hosted sessions including tournaments and league sessions now support an optional maximum incident setting that will result in drivers being automatically disqualified from sessions once they accumulate the configured number of incident points. To configure this setting look for a new checkbox inside the hosted session’s “OPTIONAL SETTINGS” area. You will need to check the checkbox and enter a number greater than 0.

For example you could do the following:
1) Create an open practice + open qualifier session
2) Create a subsequent open practice + race session. When configuring the session click on the “Click here to configure your field and grid” link to open the grid builder. Inside the grid builder select “Load from prior session” and select the prior qualifier and click on the “LOAD DRIVERS” button. That pulls the drivers from the qualifier into your race field. Then you can select the grid algorithm you want to use, then click on the “APPLY GRID NOW” button to arrange the grid. Don’t forget to click on “DONE” when you are done. This is the step that actually saves the grid to the database.

Large league helmets now show up again on the League Communication page. This bug fix also fixes an issue where some users were unable to reply to wall posts.

– Allow the system mem slider to go all the way to 3GB.

– Remove uncompressed car textures option and always force it off.

– Remove prefer shadow maps option and always force it on.

– Add in app.ini [Drive Screen] UIOffsetBottomPct=0 to allow you to shift the bottom of the driving screen up so commercial simulators with a car body in the way can still see the black box. Note that this is an integer so 10 is 10%.

– Fixed several bugs related to the biasing of dynamic shadow maps that were causing dark bands (zebra stripes) on cars and other dynamic objects, especially when viewed with highly zoomed cameras.

– Updated to the 2.5 version of the Oculus SDK.

– Turn off manual calibration of magnetometer now that the new Rift software takes care of it for us.

– Add an additional renderer.ini option for the rift headset that disables it completely (forces detection to fail). The Oculus VR SDK apparently recognizes some TVs/monitors as rift HMDs when they’re not, and setting “RiftEnabled=0” allows customers with these devices to disable the Rift prompt that appears when launching the simulator.

– Added a simplistic neck/head model so that the eye locations translate properly with the currently tracked head orientation.

– Added an IsSpectator flag to the session string.

– We now make a better computation of when to release cars who missed the start from the pit lane to prevent situations where drivers starting from pit lane were being released into the middle of the pack, unless there are people who are just really slow getting started.

– The joystick code now supports hot plugging of joysticks. Devices can be plugged in after the sim starts, without forcing a recalibration, or unplugged and plugged back in at any time without causing issues. And secondary devices, like a joystick mapped to the cameras, can remain unplugged if they are not currently needed, again without losing any joystick mappings.

– The joystick code has been reworked and optimized to remove the chance that there could be a conflict between iRacing and the joystick drivers. Force feedback effects should now behave consistently from run to run.

– Added in a centerSpringPct option to the app.ini file, so you can activate a center spring force while driving. This is not recommended for use, but was added in to better support members who are already modifying the drivers to support this.

– Most joysticks will now auto calibrate, so you should not need to use the calibration routine when setting up a device to control the cameras or the in car adjustments. Devices, like analog knobs, that don’t have a centering spring may still need to be manually calibrated.

– Manual calibration should now be more reliable for joysticks and low resolution devices. The calibration wizard has also been extended so that the reset button properly resets both the calibration and detection of the device.

– The joystick calibration data has been split out of the controls.cfg file into a text base JoyCalib.yaml file. So you can now edit the calibrations by hand in order to better support short calibrating your pedals.

– We now support 32 physical joysticks, up from 8 previously.

– Added in app.ini [ForceFeedback] disableAutoCenter=1 option, this allows you to keep the auto center effect enabled if you need it on your force feedback joystick. Note that auto center is a feature that only works on FFB joysticks and will have no effect on a FFB wheel.

– Split the trigger buttons on the XBox 360 controller into two axes using the XInput api. This can be turned on or off with the app.ini [Force Feedback] seperateXBox360Triggers=1 option.

– The minimum force parameter now smoothly compresses the forces below the minimum force level instead of applying a hard cut-off. This provides some buffer in case the slider is set wrong, and allows the minimum force to work with any device, not just G27 wheels. You can return to the older behavior with the app.ini flag: [Force Feedback] FFBUseSimpleMinForce=0

– The range of the minimum force slider was boosted to a maximum of 40%, up from 20%. This was put in place to help members running the Fanatec CSW v29 firmware to remove their rather large force deadzone.

– Many of the road course cars have a more realistic aerodynamic drafting response to other cars.

– Improved/increased the loss of grip that occurs the thinner the tire tread rubber gets.

– Added a new sponsor in remembrance of Morgan Schooley.

– Wheel strengths have been increased to match other vehicles in the simulation.

– Grille tape limits have been changed so that overheating can occur to a greater degree and reduce tandem racing.

– Grille tape limits have been changed so that overheating can occur to a greater degree and reduce tandem racing.

– The front suspension physics modeling has been improved.

– This car is now available for purchase. This car is in the same class as the Chevrolet Impala Class B and should drive identically, and setups should be interchangeable, just like how the Chevrolet SS-Gen6 and Ford Fusion-Gen6 behave.

– This car and its Rookie counterpart have been updated to NTMv5 along with other physics refinements.

– This car and its Rookie counterpart have been updated to NTMv5 along with other physics refinements.

– The Grand Prix and Endurance configs now have a correctly placed finish line, about half way along the upper grid area.

– Now has a Legends oval config.

– This track is now available as a Tech Track.

– This track is now available.

– This track now has a correctly placed finish line, about half way along the starting grid area.

CHANGE LOG: DirtThe car-to-car incident detection threshold for generating 2X contact penalties has been increased. This means that a stronger hit will now be...

This season release features TWO new cars, one new track, and a host of other enhancements. Some highlights include: • Ferrari GTE 488 •...