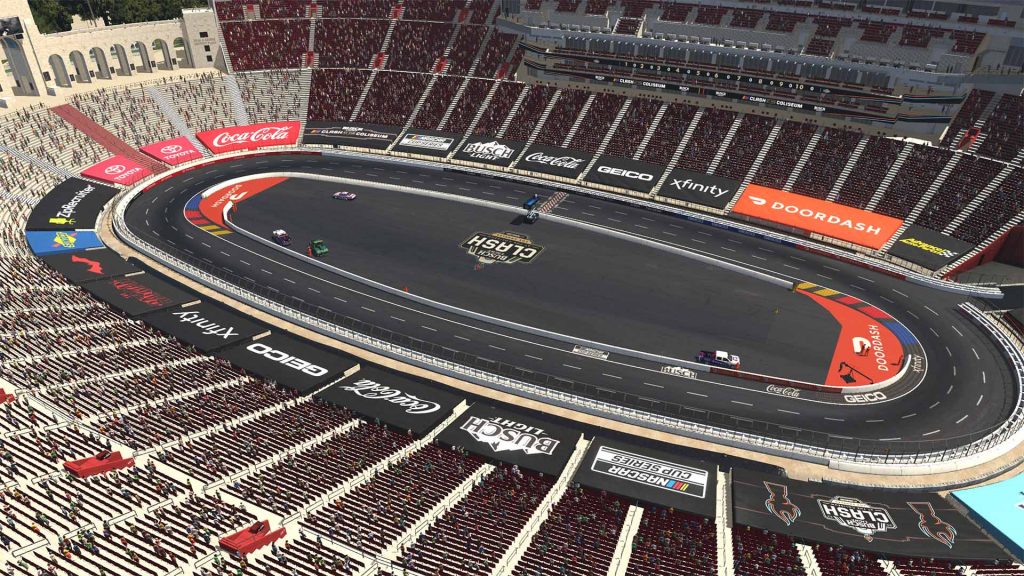 It’s finally here: the Los Angeles Memorial Coliseum makes its debut on iRacing today! The newest track on the NASCAR Cup Series calendar, and one of the most iconic and historic sporting venues in the United States, can now be purchased by all iRacing users.

The Los Angeles Memorial Coliseum represents a groundbreaking step forward for the official partnership between iRacing and NASCAR. Both the track itself, and the NASCAR Cup Series Next Gen cars that will compete on it in February 6’s Busch Light Clash at the Coliseum, will have made their debuts on iRacing before ever taking part in a race in the real world. Major accomplishments like these enable new track layouts to receive far more testing than they ever had in the past, in hopes of giving fans the best possible product out of the gate.

The quarter-mile track layout for the Coliseum was designed on iRacing with the input of not only real-world NASCAR teams and drivers, but also the competitors of the eNASCAR Coca-Cola iRacing Series, NASCAR’s premier sim racing series with more than $300,000 on the line every year. The track went through multiple different designs before a final profile was selected and built within the stadium over the winter.

For those looking to get behind the wheel of the NASCAR Cup Series Next Gen cars on the Coliseum quarter-mile, numerous public series will run over the coming weeks leading up to the real event, starting with the Coliseum Clash that launches today. In addition, the eNASCAR Coca-Cola iRacing Series will kick off its 2022 season with an exhibition Clash of its own on February 1, airing at 9PM ET on eNASCAR.com/live and iRacing.com/live. For more information on iRacing and for special offers, visit www.iracing.com.

In this article:featured, LA Coliseum, NASCAR