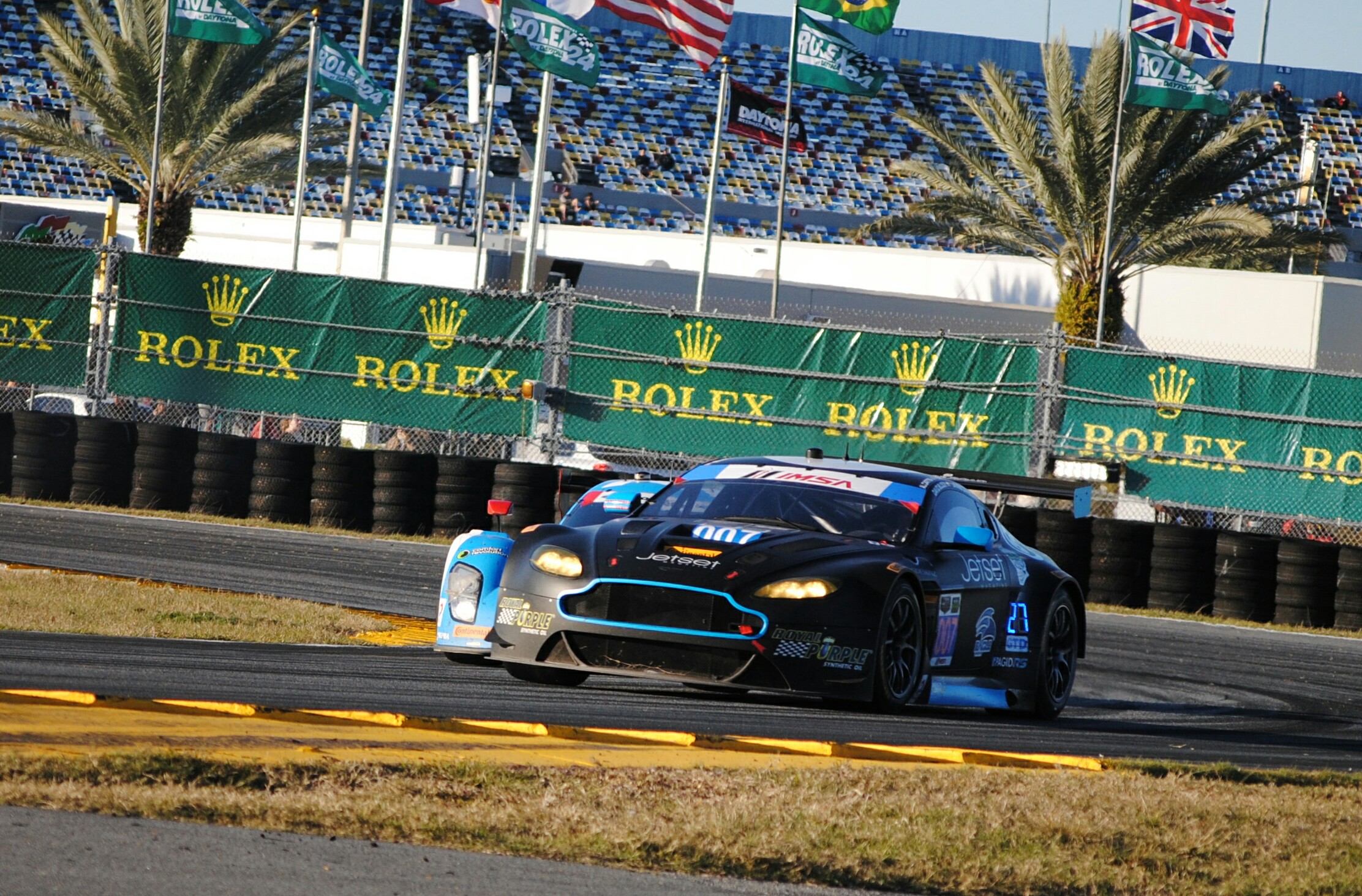 From cars in every class in the field (Daytona Prototype, Prototype Challenge, GT Le Mans and GT Daytona) to displays in the manufacturers’ midway and, of course, along the spectator fences and in the grandstands, iRacing and iRacing are represented in the Rolex 24 at Daytona.

Thanks to the magic of Twitter, a last minute meet-up saw a handful of iRacers get together with iRacing’s Kevin Bobbitt and David Phillips on race morning for an enjoyable hour bench sim-racing session.

The Daytona air reeked with laughter, tall tales and – perhaps – perhaps a lie or two.  None could match the lie that iRacer James Davison shared with us in the paddock less than 24 hours before he climbed in to the TRG Aston Martin North America GT4 for the start of the 2014 racing season.  It turns-out that, thanks to iRacing, the amiable Aussie embellished the truth — just a little white — to land his ride with TRG . . .

“I showed up at last year’s GRAND-AM finale at Lime Rock knowing that I had a potential opportunity to drive the TRG Aston Martin Vantage in the Continental Challenge Series,” he explains.  “At that point, the only circuits in North America on the GRAND-AM schedule I hadn’t raced on were Daytona and . . . Lime Rock.

“I met with Kevin Buckler (TRG owner) and one of his first questions was whether I had driven at Lime Rock before.  Naturally I answered ‘Yes’ . . . and I wound-up getting the ride.

“Now it wasn’t altogether a lie,” he continues.  “Everybody on iRacing who drives road courses has driven at Lime Rock.  It’s one of, if not THE, most raced road courses on the service.  I’d done hundreds of laps at Lime Rock in the Pontiac Solstice and some other cars.   So when I went out in the TRG car for the first time, the track was exactly the same as it is on iRacing.  The bumps, the reference points . .  . you turn-in early in the last corner to use the curbing to your advantage.

“So I nailed the opportunity and certainly iRacing was a big factor.  So I sort of lied to Kevin, but in some respects it wasn’t really a lie.  I had plenty of experience at Lime Rock thanks to iRacing.”

Davison hustles the TRG Aston Martin around the International Hairpin at the Rolex 24. (Photo Kevin Bobbitt)

Needless to say Davison used a similar modus operandi in preparing for the Rolex 24 Hours.

“Prior to the IMSA test here late last year, I spent a lot of time on iRacing getting familiar with Daytona.  When I got to the test I was able to get up to speed quickly thanks to my time on iRacing.

“No question iRacing is a revolution for young drivers,” continues the ancient (25 years old) Davison, “something I didn’t have 18 years ago when I started . . .”