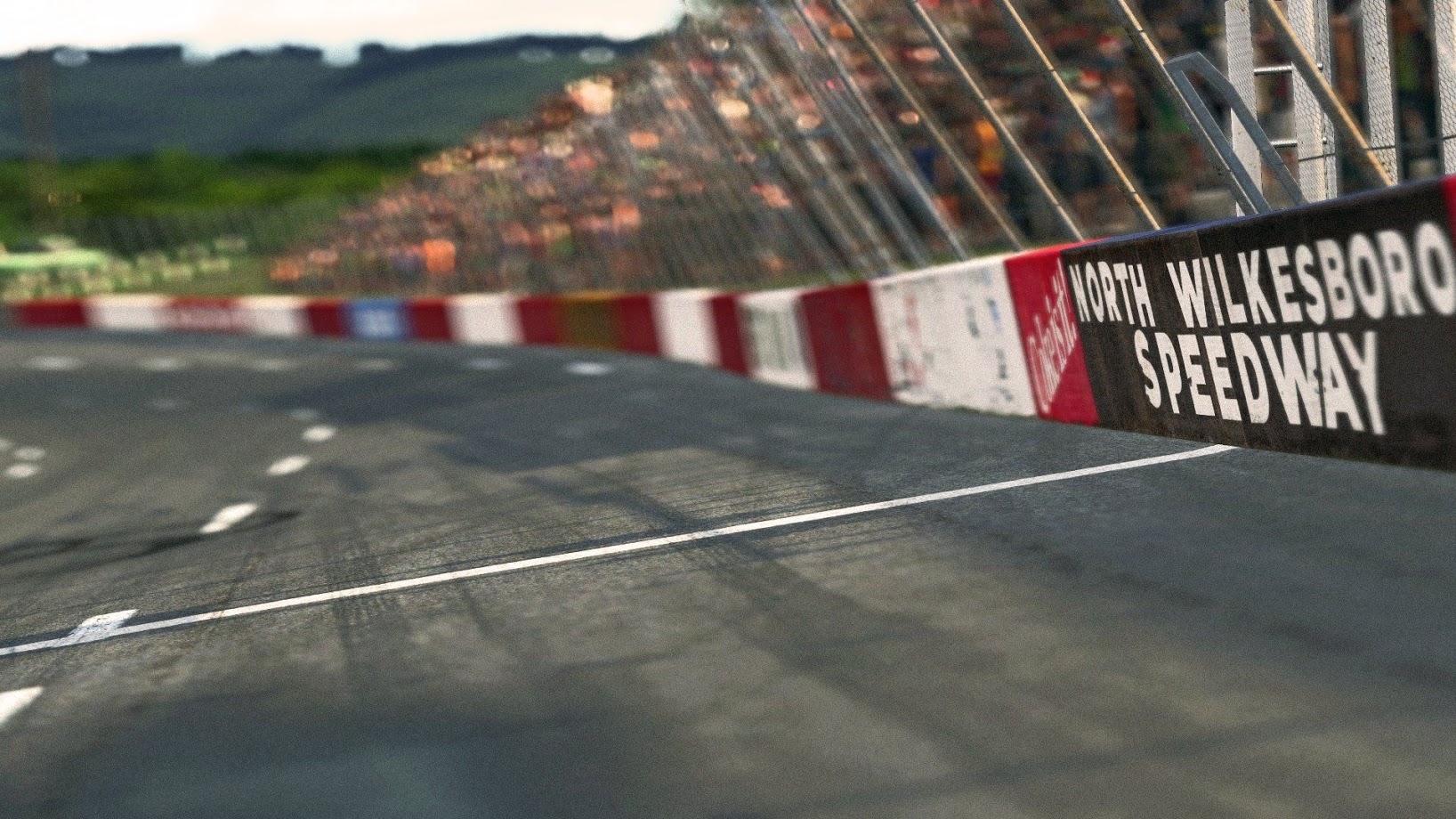 In December iRacing began an ambitious project to restore North Wilkesboro Speedway in its 1987 state. The story behind this is now known and shown in the Dirty Mo Media video. The process to create the track was quite challenging but fun.

Scanning and photos were done by a pretty small crew of myself, Kevin Iannarelli, and Thomas Leyva. Navigating the facility took careful steps due to its age and condition, but we managed with the invaluable help of the track caretaker, the great Paul Call.

Paul had seen every race run at the track, and entertained us with tales of the track, its dirt origin, moonshiners, Junior Johnson, and the times the wooden grandstands were burned to the ground suspiciously. Here are some historic pictures Paul was nice enough to share.

This project presented two major problems to solve 1) the condition of the track and 2) the fact that we were recreating ’87. Other than the main grandstand and a few buildings, the surroundings were way different in ’87. Major research would be required to pull this off.

We put the word out that we were looking for help. If you had any pictures, send them our way to help us with this effort. We received an outpouring of info from many passionate and helpful people, including Terri Parsons with an introduction to The Wilkes Journal Patriot.

Thanks to that introduction, The Wilkes Journal Patriot was kind enough to host and I spent the day pouring over volumes of negatives from both ’87 races. Many were selected to bring home for further research and were very helpful.

NASCAR themselves were tremendously helpful and opened up their archives. You may have noticed that both 1987 races were posted to YouTube around this time. We have to have watched those races a dozen times as we put together the puzzle pieces of what ’87 looked like.

Within the track walls there are many differences between now and ’87. ’87 had a short pit road that was entered out of Turn 4. Around turns 3/4 was grass with an actual curb along the apron edge. However the pit was expanded for races in the 90’s and cars entered in Turn 4.

Historical media and research in hand, the task of building the track surface was set to begin. For that we put our faith in talented Production Assistant Jake Poulin. Jake is a huge short track fan and also an experienced NR2003 modder. What a great combo for this project.

As for the design and planning of the buildings, stands, surroundings, ads, and overall visual aesthetic, that task fell to myself and Kevin Combs. Each structure that exists now had to be checked to verify whether it existed in ’87, and if it did, did it look the same?

Many differences were found, such as the gigantic grandstands that currently stretch from Turn 1 to the end of the backstretch, not having existed in 1987. The very cool paddock media center with car elevator access to the roof… well that didn’t exist in ’87 either.

Instead of that giant stand, turns 1 and 2 were a camper parking area. The backstretch had two small wooden bleachers which led up to the space occupied by the Junior Johnson stands, which is gone now but the sign remains behind as a reminder.

One really unique object we made was the manually operated Holly Farms scoreboard in turn 3. This will function correctly in iRacing and the numbers will change to match car positions. It’s a tight fit for our 3D character models up there!

The structure that gave us the most trouble was the old pit building. Torn down a year or two after the ’87 race, and photos were few and far between. In fact, we never found one of the north side. That photo was like tracking down one of Bigfoot. I hope we got it right!

The last and one of the most fun details was recreating the 80’s campers outside of turns 1 and 2. These models literally weren’t completed until the last minute before the build HAD to be started on the Wednesday night before our Thursday morning patch to the Cup drivers.

This ‘behind the scenes’ went way longer than I planned, but I have to say this project was such fun to work on with Kevin Combs, Kevin Iannarelli, Jake Poulin, Thomas, Nathan, Pete, Kirill, and more. Thanks Dale Jr. for making this possible. We hope you all enjoy yourselves in June on iRacing.

In this article:behind the scenes, featured, north wilkesboro