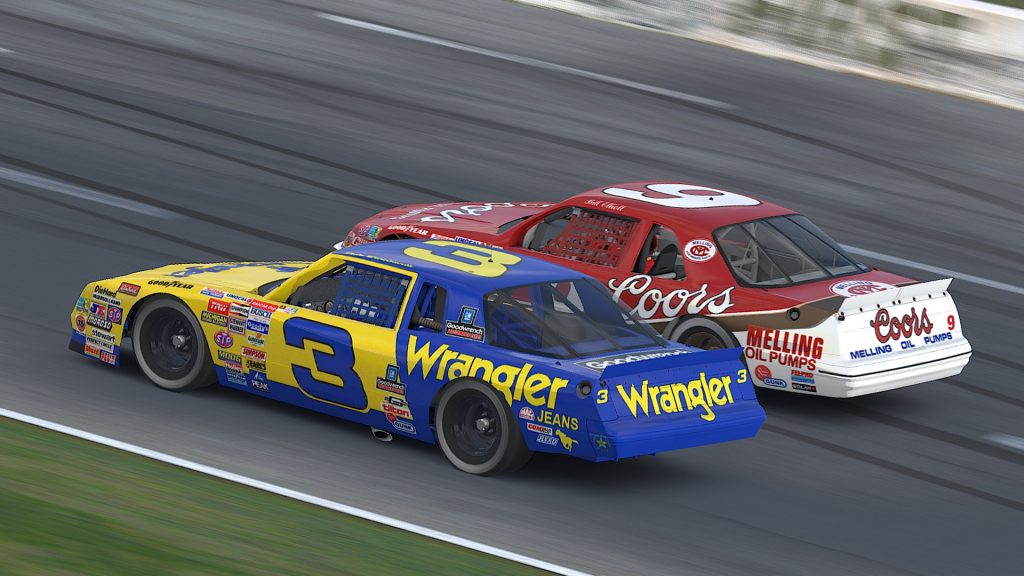 There’s a new update coming to the 1987 cars for iRacing. It’s a change in feel and drivability that I think many will enjoy. I wanted to take a moment to explain why and how this type of unique evolution occurs in the vehicles at iRacing.

The 87 car was a popular anticipated addition to the content over a year ago. The launch of the cars (a Chevy Monte Carlo and Ford Thunderbird) came in conjunction with a vintage 1987 version of North Wilkesboro Speedway. There was lots of excitement and the car and track both have delivered a lot of enjoyment across the community. For me personally though, something just wasn’t quite right. Is this really how the cars drove? And if not, how could we try and narrow in on a precise feel and handle that would mimic the cars true physics?

I made some phone calls. First off I reached out to Bobby Labonte. Bobby’s career in stock cars kicks off just after the historical 1987 season. But Bobby had experience in cars quite similar during his first few years in racing and he was an avid member of the iRacing community. Bobby dedicated hours behind the wheel of the virtual 1987 cars and also watched hours of incar footage from 1987 events themselves. He took all this information and formed an opinion of the virtual car vs the real world version. His opinion was similar to my own. The sim car was wicked loose to drive. The real World Cup cars were usually the opposite, frustrating, and fighting for turn. The sim car felt as if it was floating across the top of the racetrack. It was really a handful and a contrast to what Bobby and I both saw in the incar footage from that time frame.

So my next idea was to ask a few crew chiefs who had experience with cup racing in the 80s about the cars. I got a ton of information from guys like Gary Nelson and Andy Petree. Gary worked with Bobby Allison, Geoff Bodine, Kyle Petty and many others in those days. Petree had worked with Phil Parsons and Harry Gant back then. They were both full of details, and text messages, and emails. They were eager to share their experiences from those days. One critical area where they added important insight was aero. The numbers I got from both Gary and Petree, along with thoughts from Dale Jarrett, Kyle Petty, and Kirk Shelmerdine (and a few others) all lined up. The cars produced a certain amount of front, and a certain amount of rear downforce and back in 1987 it was a bit more than what we currently had in the sim today. While there was some concern on what these numbers would produce in the drivability of the sim, Eric Hudec and the engineers at iRacing dove into the experiment with confidence.

Once we plugged in the real world aero, we needed to test this with real world setups and tire stagger. Again, Gary and Petree both sent me identical information about tire stagger. They provided a target setting for short tracks, for larger 1.5 mile tracks, and also a setting for super speedways that Hudec installed. I got some opinions from the same group on setups, but I also had some real life notes from crew chief Doug Richert. Doug worked with my dad in his championship season in 1980 and went on to work with Neil Bonnett, Buddy Baker, Benny Parsons, and many others in the 1980s . I had nose weight and cross weight at various tracks like Atlanta, North Wilkesboro, Charlotte, and Rockingham. I had some clear ideas on what sway bars were ran, chassis heights, air pressures, spring rates, and some great info on shocks. Working with iRacing staff members Matt Holden and Christian Challiner, we made real world 1987 style setups for several tracks. These would hopefully be used in the official fixed series for the cars.

It was all coming together. But how would all the changes perform together once plugged it into the sim? Well I for one was thrilled with the results. While I’ve never driven a 1987 cup car in competition, I had an idea after watching years of racing what those guys were dealing with. Also my concerns with the original version of the car were on par with Labonte’s, giving me further confidence that we were going in a better direction. So the end result has many layers. We have an aero model better representing the limited wind tunnel numbers from that era. We have air pressures and tire stagger more in line with what crew chiefs were targeting back in those days. We have setup parameters that better reflect the knowledge and ingenuity available in the late 1980s. All of these ingredients should give the iracing customer a better experience of what Cup racing in 1987 was like.

Huge credit goes to the iRacing engineers and developers for embracing this new direction on the 1987 cars. They are always eager to make gains on every aspect of the service. These are the types of projects I love to work on with iRacing and luckily I was able to reach deep into the phone book and get some sound advice on the 87 cars. I think it’s a nice improvement for the 1987 Stock Cars and hopefully something everyone enjoys.