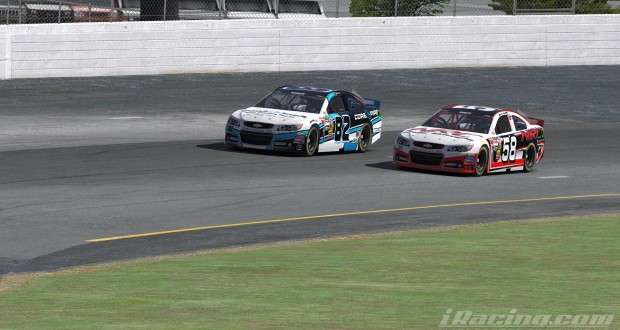 Kenny Humpe likely does not want the NASCAR iRacing Pro Series season to end any time soon. Humpe put on yet another dominating performance, this time at New Hampshire Motor Speedway. The win was Humpe’s fourth in a row and, as usual, it was an absolutely dominating effort as the Ohioan’s #58 Chevy SS showed the way for 114 of 150 laps.

Brandon Hauck finished second, just over five seconds behind Humpe. Richard Dusett was third, 11 seconds behind with Justin Trombley fourth while Granite State resident PJ Stergios had a nice drive from nineteenth on the grid to grab a top five finish on his virtual home track.

Just outside the top five came Chris Overland, who clinched the NiPS championship with one race remaining on the schedule. Overland has been a model for consistency the whole season, achieving an average start of sixth and an average finish of ninth.

“After spending roughly four years of my life sim-racing, it’s good to have something as prestigious as a NASCAR championship to show for it.” — Chris Overland.

“I can’t believe I clinched the championship tonight,” said the new champion.  “After spending roughly four years of my life sim-racing, it’s good to have something as prestigious as a NASCAR championship to show for it.”

As for the race, it was quite different than what one would expect at NHMS. Track position was still important, but not because of an excessive amount of cautions. In fact, it was the exact opposite problem. The race ran all 150 laps without a single yellow flag and with only one pit stop to work on their cars, drivers with ill- handling cars stuck back in traffic had no hope of climbing through the field.

Humpe did not start on the pole, which was quite surprising considering his recent success in qualifying.  However, it did not take him long to find his way to the front. After taking the lead from polesitter Alex Warren on Lap 34 he went un-challenged, although it appeared for a moment that Hauck might make things interesting.

Warren used his pole position to good advantage, grabbing the lead at the start.

As the first run wore on, Hauck started to reel-in Humpe slightly before attempting to overtake him during the pit stop by pitting a lap earlier.  Hauck’s gamble didn’t work out as planned, however, as he was slower getting onto pit road and had a slower stop than Humpe, leaving him in second spot when Humpe emerged from pit road.

Hauck also had a large problem on his hands. By pitting early he would have to make his second stint a bit longer in order to go the distance without stopping again for fuel. He quickly realized that he had to save gas, costing him any shot at tracking-down Humpe for the win. From there all Humpe had to do was manage the gap and be careful around lapped traffic, which he did with no issues.

While Overland may have wrapped-up the championship with his sixth place run at NHMS, there is plenty still on the line in next week’s NiPS finale at Charlotte Motor Speedway.   Runner-up in the championship is still up for grabs, with Humpe currently holding second position over Landon Harrison by seven points. Brandon Schmidt is nine points back of Harrison in fourth and just two points in front of Bryan Blackford, who sits fifth going into the finale.

Further down the standings, there is another important battle to be settled at Charlotte. The top 20 drivers in the NiPS get locked-in to the 2014 NASCAR iRacing.com Series World Championship and the fight for twentieth is very tight. Josh Berry and Brian Day are currently tied for nineteenth, nine points ahead of Justin Bolton and Trey Eidson, who are tied for twenty-first. Steven Gilbert, Alex Scribner, and Cody Byus are all within 20 points, but these three are far enough back that they will likely need help from those ahead of them if they hope to punch their tickets to the NiSWC.

Of course, it would probably be good to pay attention to Humpe when the cars take the track at Charlotte. He will be looking for his fifth straight win to close-out the season and head in to his NiSWC campaign with tons of momentum. Will Humpe make if five in a row, or will we have a new winner for the first time in over a month? Find out next Tuesday night as the NiPS concludes under the lights at CMS!

by Jason Lofing on February 26th, 2014 via inRacingNews.com Fresh off his incredible hot streak to close the NASCAR iRacing Pro Series, Kenny Humpe got his...