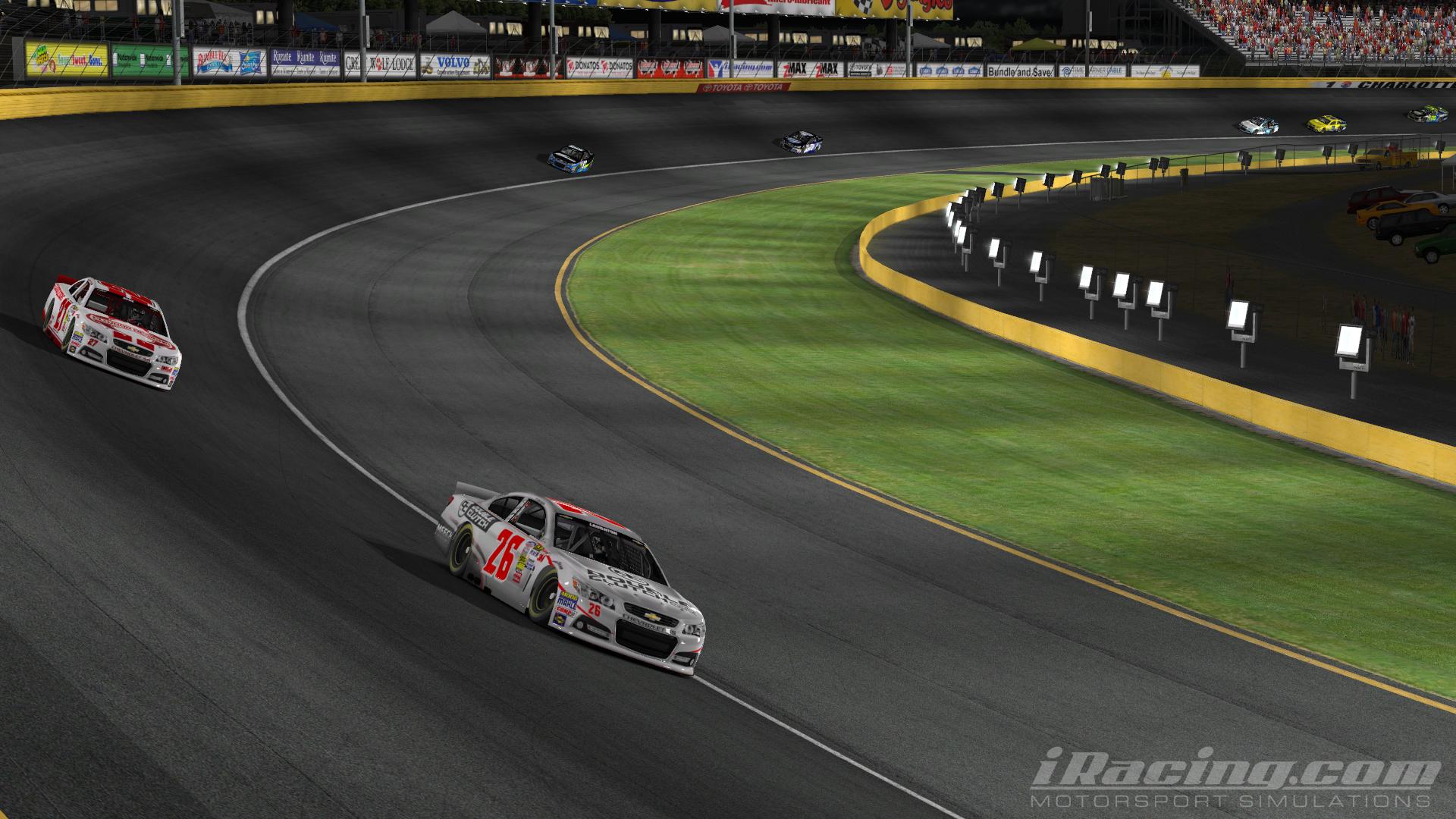 It took ten races, but Chad Laughton finally returned to the NASCAR iRacing.com Pro Series victory lane at Charlotte in the season’s final online race. After going caution free for the first 153 laps, with Laughton firmly in control for many of them, the race came down to a one-lap shootout between Laughton and Richard Dusett after a late caution.  Laughton needed a great restart and he delivered, speeding ahead of Dusett who was left to battle Brandon Hauck for second. When the field came back around to the checkers it was Laughton with a four car-length lead over Dusett, who held off Hauck. Brandon Schmidt was fourth and Josh Berry finished fifth, which locked him into the 2014 NASCAR iRacing.com Series World Championship.

The evening began with Nicolas Morse capturing the pole ahead of Cody Byus. While neither driver has had the seasons they hoped for, this was their chance to salvage something in the finale. All eyes were also on Kenny Humpe who was chasing his straight fifth victory. Humpe surprisingly started ninth — a ways farther back than he has been used to of late — and would have to fight through traffic to get to the front.

When the green dropped, Morse was out of the gate in a hurry and led the first six laps before Byus ran him down and took the lead after a brief side-by-side battle. Byus held the lead for the rest of the first fuel run, with Laughton coming up to second from his eleventh place starting position. Humpe was also on the move, rising to the runner-up spot for a short time before settling into fourth.

Morse (27) and Byus (9) had the pace but the wrong strategies and little luck at CMS.

As pit stops approached and with the race taking on a green flag look, keeping mistakes to a minimum would be key for any driver hoping to be there at the end. Humpe was the first to crack. He tried to gain a bit too much time entering pit road and got in too hot, drawing a penalty which would cost him any shot at the win. He wound up thirty-fourth at the finish, a disappointing end to an otherwise perfect second half of the season.

Meanwhile, Byus got on and off pit road cleanly and enjoyed a comfortable lead back to Schmidt and Laughton as the race wore on past the halfway point. Midway through the second run, Schmidt decided that he would try to save fuel in hopes of the race going green to the end. By saving fuel, Schmidt would only have to pit one more time while the rest of the leaders who were still running flat-out would have to pit twice. Byus must have been told about Schmidt’s gambit and started saving fuel himself, allowing Laughton to run him down and take the lead.

Laughton kept the lead after the second round of green flag pit stops, with Byus coming out second a couple seconds behind. The gap stayed relatively constant as the laps ticked down. Byus was content to ride in second and hope Laughton ran out of fuel, but that all changed when Justin Bolton spun coming off of Turn Four to bring out the first caution of the race with 13 laps to go.

The caution allowed Laughton to save enough fuel to comfortably make it to the end, so he elected to stay out and keep the lead. Byus decided his best chance would be to do the opposite of Laughton so he pitted for four tires. Unfortunately for Byus, many drivers either stayed out or took two tires which put him far back in the field with not much time left to recover.

The NiPS ended with a Bang! when Mahar’s flip triggered a last lap pile-up.

As for Laughton, his best hope would be either another quick yellow or that the cars behind him on old tires would hold up the cars on fresh tires long enough for him to score the victory. Laughton got the yellow he was looking for with six laps remaining when Mitchell Hunt got tapped from behind by Byus, resulting in Hunt going for a spin and collecting several other cars. This set the stage for the one-lap shootout, which saw another massive crash unfold out of Turn Four while the field was coming to the checkers. Brad Mahar got turned sideways across the track and seemingly the whole back half of the field plowed in to the melee as the drivers scrambled to get to the line, knowing a berth in the NiSWC could be on the line.

Missing from the headlines this week was NiPS champion Chris Overland, who had a rather uneventful race. Humpe’s issue cost him one spot in the standings, knocking him back to third and allowing Dusett to finish second. Landon Harrison wrapped-up his consistent season in fourth with Schmidt taking home fifth.

As for the battle for the top 20 and their guaranteed NiSWC spots, Berry was the most impressive. His top five run vaulted him all the way to thirteenth in the standings. Brandon Buie was the last man in, coming home 11 points ahead of Bolton who just missed out on a NiSWC spot along with Brian Day, Dylan Duval, Byus, and Steven Gilbert.

With the NiPS coming to a close, the 2014 NiSWC must be right around the corner. In roughly a month, 43 of the finest oval sim racers in the world will take to the track at Daytona International Speedway in the first of 17 races that make up the 2014 season. Will Overland, Dusett, Humpe, and the others have anything for past NiSWC champions Tyler Hudson and Ray Alfalla? Only time will tell. We will see you at Daytona!

by Jason Lofing on January 15th, 2014 on inRacingNews.com Kenny Humpe likely does not want the NASCAR iRacing Pro Series season to end any time...