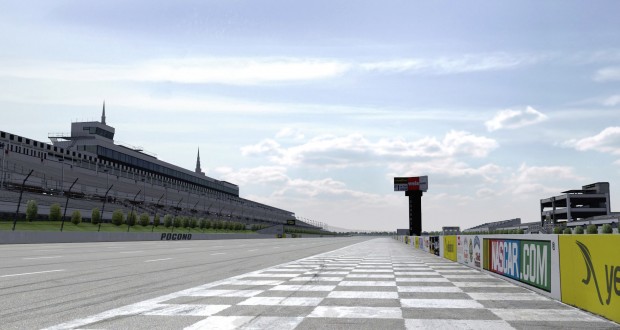 by Wil Vincent on January 17th, 2014 on inRacingNews.com

The field is set for the fifth annual World Cup of iRacing, in what looks to be the most competitive club competition to date. Five clubs will battle over four races on January 18 to determine who will have bragging rights for the next 12 months, being able to call themselves World Cup Champions.

The road race element of proceedings sees the Ford GT take on the twists and turns of Interlagos, in a thrilling 50-minute battle. The oval side of proceedings challenges drivers on one of the world’s most demanding NASCAR venues, as they head to Pocono, and have 70 laps to try and tame the ‘Tricky Triangle’ in the Gen 6 Chevrolet SS and Ford Fusion.

The World Cup is unique in that all drivers from a club, from five year + veterans to rookies can make a difference, and all skill levels are vital in helping to secure the title. Each club represented in the finals have current and former drivers from the iGPWCS, however, these can only play a small role in the final points standings. It’s the breadth of drivers throughout the club who will ultimately determine who wins.

For this year, this need for skill and dedication throughout the all members within the five clubs is even more profound, as the newly introduced ‘Group B’ Final will determine 35% of the overall score. This means that drivers who are only a couple of months into their iRacing careers can have the same impact as Huttu, Lopez, Luis, Krönke, and Townend when all is said and done.

For the five clubs involved, a shot at sim-racing glory is at stake. We take a look at each of the club’s chances heading into the competition.

Club Finland
Club Finland won the 2012 competition in emphatic fashion, and have been at the top throughout the qualification rounds. A statement was sent to all clubs when the Finns finished the day just 12 points shy of a ‘perfect game.’

As reigning World Cup Champions, club captain Joni Backman got to make the choice on the cars and tracks run in the finals, and naturally, two car/track combinations were chosen to give a degree of home field advantage. The Ford GT is one of the ‘most run’ cars within the club, and Pocono is a track at which Finnish drivers have traditionally excelled.

A Finnish driver had victory cruelly snapped from his grasp in the iRacing Indy 500 back in May; the entire club will be hoping that lightning doesn’t strike twice when the World Cup rolls into town, and hurt their chances of securing back-to-back crowns.

Club Brasil
Club Brasil made a name for themselves like never before in the 2012 competition, finishing ahead of DE-AT-CH, and really taking the charge to Club Finland on the ovals. In fact, it could be argued that with a slightly better road performance, we could be talking about Brasil being the defending champions, and not Club Finland.

For this club, they’ll be looking to go one step further, and take the overall crown. There clearly is the talent, on both the road courses and ovals, and the depth of this will be the critical component to success. In the final qualifiers however, the club was last of the five who qualified on the road races, and all within the team will remember this as they line up on Saturday.

It’s worth remembering however that five Club Brasil drivers in the Top 10 of the Oval final helped secured second place in the 2012 competition, and if that can be repeated on the road side, then the other four clubs will really start worrying.

Club DE-AT-CH
Newer iRacers may forget that DE-AT-CH won the first three World Cups in a row, and coming into the 2012 World Cup, looked unstoppable. A mixture of bad luck, a determined Finnish club, and an ever rising Club Brasil put paid to keeping a stranglehold on the competition, as the DE-AT-CH contingent could only finish third overall. Make no mistake, this year, one of the largest and dedicated clubs on iRacing will be looking to take back the title they believe is rightfully theirs.

What makes DE-AT-CH so strong is their versatility, combined with strength in numbers. Throughout this year’s competition, the team always looked strong, even after progression was guaranteed, and some may argue that they didn’t show their full hand in the last round. You can never underestimate the club, and barring any major hiccups on the day, will definitely be in the running.

Club UK & Ireland
The World Cup has been cruel to this club. Back in 2010, there was heartbreak after missing out on the finals on a technicality in what was arguably their best chance to win the competition. They’ve been represented every other year however, and whilst they’ve not won the big prize to date, they’ve been able to demonstrate true club spirit, coupled with some impressive driving.

2012 was a difficult year for UK&I, as they finished last in the finals, however positives could be found despite this. Oval participation and results had improved over previous years, and there were some incredibly strong performances on the road side across all divisions. The club has always found a way to rise to the occasion when race day comes around, and under dedicated leadership, there is a chance that the sheer tenacity of members translates into success.

Club Iberia
Of the five clubs, Iberia are arguably the dark horses. In 2012, they could only mange 20th place in the prelims. However, like Finland did one year ago, Iberia have rallied together, and snatched the final qualification spot this time around, placing their club into the spotlight.

In the last round, Iberia were able to come third in the Road competition but were a bit short on the ovals. This, whilst being known to the club, will likely play little on their mind, as their progression from a year previous is one of the biggest turnaround stories in World Cup history. Making the finals will really buoy drivers on to go that extra step, and the fact they enter as underdogs will only drive them further.

Just like Brasil last year, there’s the perfect opportunity for Iberia to cause a huge upset, and even if they don’t win the overall title, it’s likely that they will be a deciding factor in who does.

Broadcasting
For the third year in succession, GlacierTV will provide full coverage of the finals, providing a total of seven hours of coverage on the day. In the first of its kind within sim-racing, they will also run a second stream, driven entirely by twitter interaction.

The wait is over, all three NASCAR Cup cars and every NASCAR Cup track will now be represented in iRacing! The last piece is...

iRacing is working on the Toyota Camry Gen-6 car as driven in the NASCAR Sprint Cup Series. This will be released in the season...