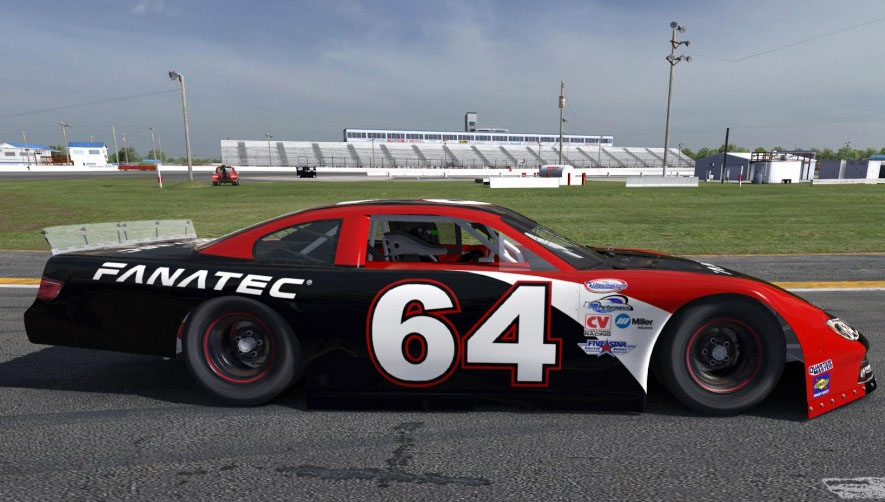 by Jesse Thompson on January 29th, 2014 via inRacingNews.com

“Possibly the greatest car (iRacing) have ever developed . . .”

On Monday, iRacing released a new build that included what is possibly the greatest car they have ever developed. The Super Late Model has been long anticipated and it seems to be so popular that the service had to go into maintenance mode multiple times over the past 36 hours. But enough about that . . .

Let’s talk about the car itself. First off, Wow! What a monster – and I mean that in a good way. This thing picks up like no tomorrow, and don’t worry about over driving it into the corner because this car will stick like glue. Coming up off the corner can be a challenge because when you get on the gas, you can feel it.

The key is to feather the throttle until you’re straight and then put the hammer down. The braking is incredible. I’ve found myself spinning many times, although you can get on the brakes and get it stopped pretty easily unlike the NASCAR Late Model where you slide into whatever is near you when you spin. The all around handling is a sim-racer’s dream. There is no wiggle or rollover feeling with the chassis. Like I said, it sticks like glue.

One part that I do like about the car and this may be minor to some, but I really enjoy seeing scuffed Hoosiers and not “official” iRacing brand slicks. Just a nice little touch.

As someone who grew up with an extensive knowledge of a Super Late Model (we had one in our garage for 15 years) I can safely say that when I listen to the car, it sounds exactly like a real life PASS or CRA Super Late Model. From braking to getting on the gas to being at full song as you scream down the front stretch at New Smyrna Speedway or the Roman Colosseum of NASCAR — Bristol Motor Speedway — it is just all around a harmonic dream to listen to. But don’t get too attached to listening because you still have to pay attention and drive.

You may remember that iRacing narrowly avoided a disaster when they originally attempted to scan the Super Late Model. I mean that thing was not an up-to-date chassis and it even had an air cleaner sticking through the hood. Luckily, the members went to the Facebook page, the Twitter page and even the Forum to let the developers know they were not happy. iRacing took notice of these complaints and scrapped the production. Then they approached two New England PASS drivers and work resumed using brand new cars to scan. Thank goodness for them.

Thanks to iRacing, designing your own paint scheme is very simple now. No more stamped contingency decals or even head/tail lights. A simple Google search and Photoshop will open-up huge possibilities when it comes to designing your own Super Late Model. No more Ford SLMs on Chevy bodies or vice versa. You can now design to your heart’s content that just feels right.

With facilities like Lucas Oil Raceway Park in the pipeline, the Super Late Model will get its chance to provide some incredible short track action, because that’s all we want. On behalf of every short track oval racer on the service, I thank you iRacing for creating such a beautiful race car.

In this article:inRacingNews.com, Super Late Model

by David Phillips on January 29th, 2014 via inRacingNews.com Tony Gardner Talks About “Cheating” with iRacing News editor David Phillips In the coming weeks, iRacingNews will...

The Super Late Model ranks among the fastest race cars to ever hit the short track. The 358 cub in V8 pumps-out more than...

Website: League Calendar Exports – You can now export your league calendar in iCalendar format. This allows you to integrate your iRacing League season...

iRacing’s new build for 2014 Season 1 is to be released today. Maintenance is scheduled for 10:00am EST. While it has been quiet over...